For financial professionals only

Consequences of Covid: the impact on generations

The coronavirus outbreak has drawn stark lines between generations. Older people are categorised amongst the most vulnerable, and many are suffering loss, ill-health, and loneliness. But the impact of the virus has been felt strongly across other age groups, too. And the true costs to the economy, society and our future generations will only be known in time.

In this series, we will explore the likely long-term financial impact for people at different stages of life, and where their advice needs will lie in years to come.

A tricky time for the silver savers

We’ve all heard the phrase, “time in the markets, not timing the markets” – but what happens when you’re out of time?

For those approaching or at retirement, the market shock in the early part of this year couldn’t have come at a worse moment. Years of hard work, accumulating a pot to pay for later life, suddenly hit by an indiscriminate sell off just when it’s needed. Markets may have broadly recovered, but the events have highlighted the importance of sequence risk for those in drawdown, and why the challenges of decumulation must be catered for in any retirement investment strategy.

Drawing down in a downturn

Clients already accessing their pension benefits may feel insulated from the market fall. After all, they probably continued to withdraw their usual income. However, with stock markets like the FTSE100 off some 20% at its lowest point, those withdrawals will have been more costly.

In simple terms, a client may be taking £4,000 a year from a £100,000 pension pot, assuming 4% is a sustainable level. But should that pot fall to £80,000, that £4,000 is now a 5% withdrawal. The longer this goes on, the more the effect is compounded with those withdrawals themselves reducing the pot further. This “pound-cost ravaging” in the early stages of retirement can be hard to recover from, putting retirement plans at risk and leaving no buffer for later, unexpected costs, such as long-term care.

The traditional approach to avoiding dramatic losses in retirement was “life-styling”, where individuals gradually reduced their exposure to risk assets as they approached retirement age, moving equity investments increasingly into fixed interest, and cash or near-cash equivalents.

This may have worked when retirement was an all-or-nothing game, but with many retirees now electing to keep some employment or consultancy up, at least in the earlier years, and with Pensions Freedoms allowing more flexible access, the question of decumulation is no longer a binary one of risk on versus risk off.

In addition, as we all live longer (more than a quarter of today’s 65 year olds are likely to live into their mid-90s), there’s a need to keep some exposure to growth assets simply to sustain the pension pot through many years of drawdown.

Decumulation is a different ball game

Our Guardian solution was designed to meet these difficulties and rose to that challenge during the Q1 sell off, as can be seen in the chart below (from inception). 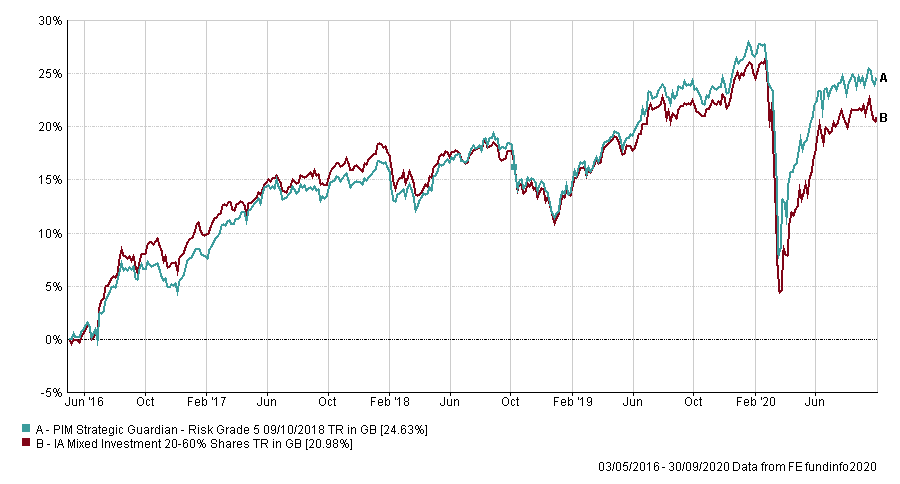 This outperformance is down to a unique asset allocation, designed in recognition that those drawing on their pension savings have a low capacity for loss, and high liquidity needs.

As an example, our exposure to property is lower in the Guardian models than our other solutions, in recognition of the less liquid nature of Property funds, particularly in difficult markets. The near-cash element, Managed Liquidity, is held through to higher risk grades as an additional liquidity buffer, while short dated corporate debt and Gilts also support liquidity requirements, the latter also offering ballast in down markets.

This defensive element is further supported by the inclusion of uncorrelated Absolute Return funds to behave in a different way during market shocks, diversifying portfolio returns and reducing client exposure to market falls.

Complementing these risk management factors is a considered exposure to specific risk markets ensuring the capital is preserved over the long term – a very different approach to the traditional life-styling methodology. An example of this would be specific exposure to developed market smaller companies, as seen in the UK and US in the Guardian models.

Together, these investments have offered clients downside protection when it was needed, as well as capturing the subsequent market rally.

This article is for financial professionals only. Any information contained within is of a general nature and should not be construed as a form of personal recommendation or financial advice. Nor is the information to be considered an offer or solicitation to deal in any financial instrument or to engage in any investment service or activity. Parmenion accepts no duty of care or liability for loss arising from any person acting, or refraining from acting, as a result of any information contained within this article. All investment carries risk. The value of investments, and the income from them, can go down as well as up and investors may get back less than they put in. Past performance is not a reliable indicator of future returns.

Speak to us and find out how we can help your business thrive.